Intravenous Immune Globulin 5% is produced by Shanghai Xinxing Medicine Co. Ltd. (IVIG 5% SXX) is a sterile solution containing 4.5% - 5.5% of proteins at a low pH (4.0). IVIG 5% SXX is prepared from large pools of Human Plasma obtained from healthy donors (minimum 3000 donor plasma for one batch) that are screened & found negative for blood borne viruses like HBsAg, HCV and HIV. The plasma is fractionated by Cohn Oncley method & IVIG 5% SXX is obtained from Effluent III. The product contains intact & functional antibodies against antigens of various types with a wide variety. This contains various types of anti-bacterial, anti-viral & anti-fungal antibodies. IVIG 5% SXX is used in many disease states like Primary Immunodeficiencies, Idiopathic Thrombocytopenic Purpura, Bone Marrow Transplantation, HIV Infection in children & other off label indications. Studies have been conducted in many other autoimmune disorders & secondary immune deficiencies. For more details about the product, feel free to contact.

The primary immune deficiencies result from defects in T-lymphocytes, B-lymphocytes, phagocytic cells or the complement system. Most of them are inherited diseases and may run in families, such as X-linked agammaglobulinemia (XLA) or Severe Combined Immunodeficiency (SCID). Other primary immune deficiencies, such as Common Variable Immunodeficiency (CVID) and Selective IgA Deficiency do not appear to be inherited in a clear cut or predictable fashion. In these disorders the cause is unknown but the interaction of genetic and environmental factors may play a role in their causation 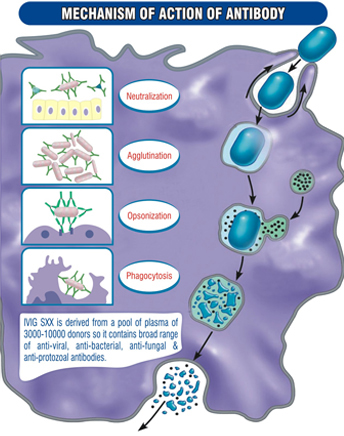 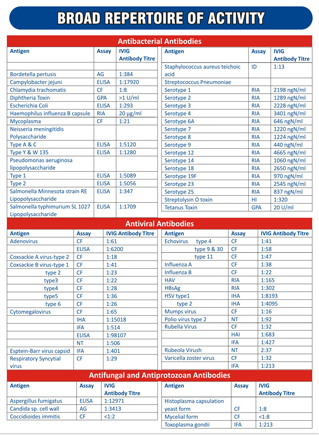 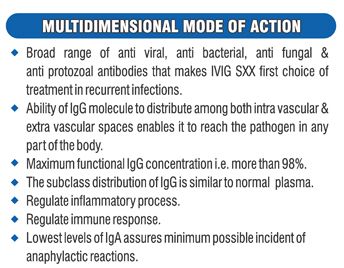 Dermatomyositis is an idiopathic inflammatory myopathy with characteristic cutaneous findings that occur in children and adults. This systemic disorder most frequently affects the skin and muscles but may also affect the joints; the esophagus; the lungs; and, less commonly, the heart. Dystrophic calcinosis may complicate dermatomyositis and is most often observed in children anadolescents.

CIDP typically starts insidiously and evolves slowly, in either a slowly progressive or a relapsing manner, with partial or complete recovery between recurrences; periods of worsening and improvement usually last weeks or months. Most experts consider the necessary duration of symptoms to be greater than 8 weeks for the diagnosis of CIDP to be made. Symptoms reported include the following preceding infection (infrequent), initial limb weakness, both proximal and distal, sensory symptoms (eg, tingling and numbness of hands and feet), motor symptoms (usually predominant).

Myasthenia gravis (MG) is a relatively rare autoimmune disorder in which antibodies form against acetylcholine nicotinic postsynaptic receptors at the neuromuscular junction of skeletal muscles.[1, 2] MG is sometimes identified as having an ocular and generalized form, although one is not exclusive of the other and the ocular form is considered an initial, milder form of illness that progresses to the more severe generalized form in most but not all patients.

Multiple sclerosis (MS) involves an immune-mediated process in which an abnormal response of the bodyâ€™s immune system is directed against the central nervous system (CNS), which is made up of the brain, spinal cord and optic nerves. The exact antigen â€” or target that the immune cells are sensitized to attack â€” remains unknown, which is why MS is considered by many experts to be “immune-mediated” rather than “autoimmune”.

Lambert-Eaton myasthenic syndrome (LEMS) is a rare presynaptic disorder of neuromuscular transmission in which quantal release of acetylcholine (ACh) is impaired, causing a unique set of clinical characteristics, which include proximal muscle weakness, depressed tendon reflexes, posttetanic potentiation, and autonomic changes. The initial presentation can be similar to that of myasthenia gravis (MG), but the progressions of the 2 diseases have some important differences.

Stiff person syndrome is rather unique among neurologic diagnoses because of its lack of significant similarity to any other neurologic diseases. Although rare, once observed it is quite unforgettable. Possibly the closest related disease is tetanus because both conditions affect peripheral inhibition via central mechanisms and both conditions inhibit central gamma-aminobutyric acid (GABA) systems.

HEMOLYTIC DISEASE OF THE NEWBORN

Hemolytic disease of the newborn (HDN) is a blood disorder in a fetus or newborn infant. In some infants, it can be life-threatening. A, B, AB, and O are the four major blood types. The types are based on small substances (molecules) on the surface of the blood cells. When people who have one blood type receive blood from someone with a different blood type, it may cause their immune system to react. This is called ABO incompatibility. Rh incompatibility is a condition that develops when a pregnant woman has Rh-negative blood and the baby in her womb has Rh-positive blood.

HDN may develop when a mother and her unborn baby have different blood types (called “incompatibility”). The mother produces substances called antibodies that attack the developing baby’s red blood cells. The most common form of HDN is ABO incompatibility, which is usually not very severe. Other, less common types may cause more severe problems. The least common form is Rh incompatibility, which can almost always be prevented. When this form does occur, it can cause very severe anemia in the baby.

Neonatal Alloimmune Thrombocytopenia (NAIT) is a disorder caused by fetomaternal platelet incompatibility analogous to that in Rhesus Haemolytic Disease, with maternal anti-platelet antibodies crossing the placenta and destroying fetal platelets. The majority of cases are caused by antibodies directed against Human Platelet Antigen-1a (HPA-1a) and HPA-5b, but many rarer reactions have been reported. Prospective studies have shown incidence to be 1:1,100 live births,1 but the condition is under-reported. Mortality is around 10% of presenting cases, with neurological sequelae, including intracranial haemorrhage and subsequent neurodevelopmental delay in up to 25%.

Autoimmune disorder is a clinical syndrome in which a decreased number of circulating platelets (thrombocytopenia) manifests as a bleeding tendency, easy bruising (purpura), or extravasation of blood from capillaries into skin and mucous membranes (petechiae). Although most cases of acute ITP, particularly in children, are mild and self-limited, intracranial hemorrhage may occur when the platelet count drops below 10 x 109/L (< 10 x 103/μL); this occurs in 0.5-1% of children, and half of these cases are fatal.